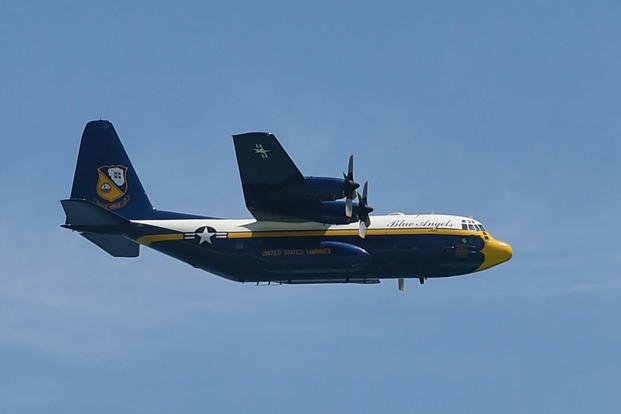 The Blue Angels’ beloved transport plane reportedly stole the show when the aircraft returned to the skies nearly a year after the entire KC-130T fleet was grounded amid safety concerns.

“Fat Albert,” the Navy‘s flight demonstration squadron’s C-130T Hercules transport plane, made its return with a flat pass during a Friday air show in Pensacola, Florida, where the Blue Angels are based.

“The aircraft hasn’t flown in a while so we haven’t gotten in the training necessary to fly the whole demonstration,” said Navy Lt. David Gardner, a Blue Angels spokesman. “But we wanted to show Pensacola that Fat Albert is indeed up and flying. … It’s kind of a special audience for us because it’s home.”

Spectators cheered, delighted to see Fat Albert back in the air as it crossed the beach just before the six F/A-18 Hornets began their demonstration, the Pensacola News Journal reported.

Fat Albert, along with most of the Navy and Marine Corps‘ C-130 fleets, was grounded following a crash over Mississippi that left 16 troops dead. Inspections later identified a propeller problem, so Fat Albert and the rest of the aircraft faced lengthy repairs.

Gardner said the Blue Angels’ maintenance team has been working around the clock over the past 11 months to get the squadron’s C-130 flying again. The last of the Fat Albert’s new propellers was installed in June, he said. The crew also took care of some routine maintenance.

The logistics mission is Fat Albert’s primary job. While the plane was out of commission, other Marine Corps and Navy air crews were there to fill in, Gardner said.

“We’re thankful that they’ve been able to step in and help us,” he said, “and now we’re looking forward to having our organic transport capability back.”

Fat Albert’s air show demonstrations will likely be limited this summer as pilots get some much-needed time back in the cockpit. For now, crew safety and the logistics mission remain the top priorities.

“Safety is a primary factor,” Gardner said. “We just want to make sure everyone’s trained up and the aircraft is working like it’s supposed to so we can get our people and our things to air shows.”

We use cookies to ensure that we give you the best experience on our website. If you continue to use this site we will assume that you are happy with it.Ok